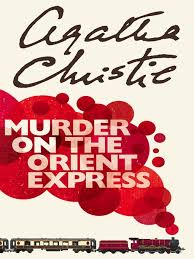 You are on one of the most famous trains in the world, on one of its original routes when it hits a snowdrift – what do you do? You throw in a dead body and the world’s most famous Belgian detective and you have ‘Murder on the Orient Express’.

This is one of Agatha Christie’s finest stories featuring Hercule Poirot. After the first night aboard the Orient Express, the passengers wake up to learn one of them has been murdered, stabbed twelve times in rather curious fashion. Poirot is asked by the director of the company to investigate what has happened and find out the truth. The twelve other passengers do not know each other, but do they know the victim? Poirot endeavours to find out the truth and uses his charm, wit and ‘little grey cells’ to discover it. Christie cleverly separate the book into three parts the facts, the evidence and where Poirot “thinks”  this breaks the book down into not just manageable parts for reading but concentrates the reader on each possible suspect presenting everything. Poirot then brings us all together to come to the conclusion.

Much has been written about this novel over the years and on reviews, and I have tried to stay away from plot etc because I think it would be all too easy to inadvertently let the potential reader find out the truth before the famous dénouement . Which Agatha Christie is ultimately in my eyes famous for. The point where all those loose ends, red herrings and snippets of information are brought together. The interesting thing is, the clues are throughout the book and are there for the reader to pick up and decipher.

If you have never picked up a Christie before, and want to experience what perhaps all the fuss is about, then this is an excellent book to start. I would recommend the David Suchet TV adaptation version for a visual that is true to the book. The ending is the same, but the only criticism (of the television version) is that it is made more moralistic then perhaps the book comes across. 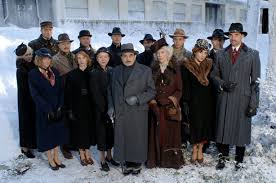 I am really getting into reading more Agatha Christie and picked this one up, because of the TV adaptation which I think was magnificent and made television on Christmas Day more interesting. Although made my mum and I search her house looking for the book which we were convinced she must have somewhere and when discovered she did not we then proceeded to try to comprehend why she did not own it. Especially amongst the huge number of other Agatha Christie books she does own!

Connected to this, is the wonderful ITV documentary with David Suchet where he gets to ride on the ‘real’ Orient Express. The television one was created in a studio! This took you into the world behind the Orient Express and Suchet made the perfect passenger and even driver! Suchet came across as a genuine fan of the train as well as the infamous character and took all the jokes about “is there going to be a murder” and “we know whodunnit”  with great aplomb! His ability to slip straight into Poirot and out of it is uncanny, but for a man who has made this his role why should it not be? I look forward to the rest of the adaptations that are left to make and I hope ITV do not make any more foolish decisions about not making anymore. If they do – then pay attention BBC you need to finish this wonderful work and fulfil all Agatha Christie Poirot stories and make Suchet happy! 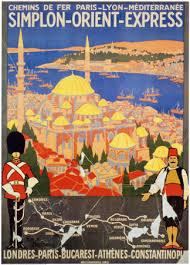 Back to the Train! This would be an ultimate dream for me to ride on the Orient Express, reading the said book and knowing whodunnit on a journey similar to the character. What luxury! Can I recreate this at home? No, I think it would ruin the dream. I will stick to the book and the TV version.

2 thoughts on “Murder on the Orient Express – Agatha Christie”