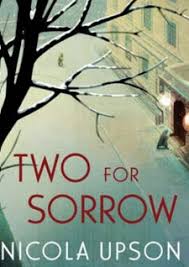 This is the third Nicola Upson book to feature the real life author Josephine Tey (Elizabeth Mackintosh) as a central character within a fictional story that Upson weaves around this time real life events. Here in Upson’s third book we actually find Josephine in the centre of murders committed in the Thirties and also at the turn of the century. There is a lot more focus on the emotional and personal side of Tey in this book as well.

To set the scene in 1903 Amelia Sach and Annie Walters are hanged in Holloway Prison for killing babies.  Commonly known at the turn of the century as baby farmers. (It is worth noting that these are real people) Tey is fascinated by their story and plots and researches a possible novel about these two ill fated women. Upson here creates the drafts of this ‘untitled’ work throughout the book as we see how an author could possible piece together a fictional plot based up on real women. To me there is some sort of irony in this, as this is exactly what Upson is doing with the Tey character.

Move forward 30 years from these hanged women and we are in the Golden Age of the Thirties and Tey is currently residing in The Cowdray Club where she is researching and drafting her new novel. Her friend Archie Penrose and an Inspector at Scotland Yard is aware of The Cowdray Club as there have been some petty thefts and spiteful letters being sent. His two cousins Ronnie and Lettice also friends of Tey are also aware of the club as they are designing and making the gowns for a Charity Gala to be held there in aid of the Nurses who make a percentage of the club’s membership.

It is this dressmaking that leads Inspector Penrose further into the workings of The Cowdray Club when one of his cousins best up and coming seamstresses is found dead. Murdered in a most horrific manner as to if ensure she would never be able to speak again. But why was her father also killed at the same time? As Penrose gets further into this case, he begins to realise that there could be a connection to these murders and the two women that were hanged for their crime in 1903. Does the research that Tey has completed so far hold the key?

Other characters from previous books are also featured, especially the relationship of Lydia and Marta. Here you need background knowledge as it is not made clear in this book why Marta and Lydia ended their relationship in the last book and why Marta was incarcerated. This was the only part of the book which I was slightly annoyed at. It would probably have just needed a couple of sentences to make it clear to all. This might then have help strengthen the emotions the reader is meant to feel when you discover the sudden reappearance of Marta in Tey’s life and the letters that she had written to tell of her love. This is the ‘third’ plot strand within this book.

An excellently written book, which has plenty of detail and although it appears complicated it, is handled with style. The twists and turn enable it to be a page turner and also I think because a lot of the content of the book is based on real people, real places and real events it has an added dimension. I do hope Upson continues to write brooks with Tey in them. They are a sheer delight.

There is a lot to this book, and I hope my review does it some sort of justice without giving too much of the plot away. I discovered this author through the Amazon Vine programme when I chose to read and review Angel with Two Face. I then read the first book, An Expert in Murder.

From reading the reviews from all three books, there is a division about putting a real life author into a murder mystery where she is playing herself but no. However, it could be seen as a tool or perhaps a gimmick into creating and selling an idea in books. I am not quite sure, but what this author has done for me has introduced me to Jospehine Tey and I must find my mum’s books and read them for myself.

The History graduate in me also has picked up on the ‘real’ parts of the third book and therefore my reading continues in finding more about the Baby Farmers, Amelia Sach and Annie Walters. It has made interesting reading the reports in newspapers of the time, especially the wording “Both women were remanded in custody for a week. Medical evidence of a remarkable character will, it is understood, be given later”. They were two of the only five women executed and buried at Holloway prison. Subsequently they were moved to Brookwood cemetery (another interesting historical place).

The Cowdray Club did exist

The Cowdray Club was established in 1922 and remained in existence until 1974 when it merged with the Naval and Military Club in Piccadilly. Its original name was The Nation’s Nurses and Professional Women’s Club Ltd, and its accounts and legal agreements used this name throughout. The First Viscountess Cowdray did much to promote the nursing profession. As Annie Pearson, the wife of Weetmar Dickinson Pearson, a successful engineering contractor (Pearson and Son), her life had taken her to Spain, Mexico, New York, Egypt and Malta. She left her mark in her humane care for her husband’s employees and in the gift of Cowdray Hospital to Mexico City. She was a supporter of district nursing, being associated with the Queen’s Institute of District Nursing, and active in establishing nursing services in many rural districts of England and Scotland. She provided seven Queen’s Nurses at her own expense.

Following the creation of the College of Nursing in 1916, Viscountess Cowdray became involved with fundraising for The Nation’s Fund for Nurses for the Creation of a Benevolent Fund for Nurses and the endowment of the College of Nursing. This involvement led to the idea of a gift of a social club for nurses and professional women which “should provide a centre for intercourse and recreation and which should also furnish some of those creature comforts which we associate with the word ‘Home'”. To this end the Cowdrays purchased 20 Cavendish Square from Mr and Mrs Asquith.

The house was originally built in 1703 and possessed a staircase decorated by Sir James Thornhill. It was converted into a club by Sir Edwin Cooper and later given a new facade after the purchase of neighbouring properties by the College of Nursing in 1928-1930. The building belonged to the College of Nursing and was leased to the club.

The membership of the club was on a basis of 55 per cent nurses, 35 per cent professional women and 10 per cent women without professional qualifications. The College of Nursing had a 50 per cent representation on the council of the club. For much of its existence, the club had over 4,000 members.

There is more and from one interesting thread many more open up, but I have chosen not to go further for the moment. As history can be quite grim.