However, I have been working on a Sue Hawkins 15 Side Biscornu featured in the latest Stitch magazine. Mine is going to look nothing like this one, in terms of colour, thread used and the decorations. However, craft and creating is about your own imagination. I have used up old perle threads from old book marks that I have made in the past (more about them another day). This is what the 15 squares look like before being cut out and made up 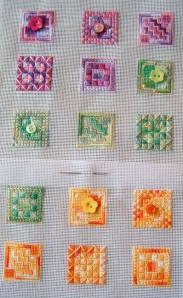 I hope to see Sue Hawkins at the Alexandra Palace ‘Knitting and Stitching Show’ in October, where she will probably have a 15 side biscornu as a kit.

Next up is material you may recognise from previous posts –

I used this to back my lavender bag I made. Well I knew what I wanted to do with the rest, and that was make a doorstop for the bedroom. Currently have a piece of folded up cardboard keeping the door open, which was there when I moved in! So I cut out 6 squares but thought they were too small, then I cut out another 6 squares bigger. The result having sewn them together on my mums sewing machine is above. Now I need to cut out a bag of some fairly strong material to put the sand in (that is the weight) and then I can finish the large one-off with stuffing and sew together. Voila – one door stop! The smaller one, well I still have a lot of lavender, so it will be filled with that (in a small organza bag) and stuffing, sewn together and I thought would look good placed on top. A stack of doorstops! Job for next Saturday, finish this off! 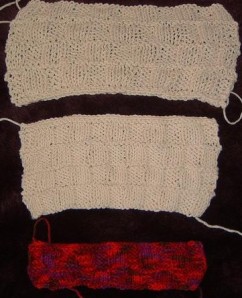 This is not technically a nearly finished but a nearly start. I have picked up the knitting needles, because I can knit quite happily in front of the television, without having to pay much attention to what I am doing. I found a pattern for a Basketweave Afghan in a new book, apologies but I cannot remember the books name (my mum bought it). Now although I can knit, I cannot do complicated patterns. To test this pattern out, I dug out some needles and wool and did a couple of test pieces. The pattern says to cast on 252 stitches, but ever the creator I have decided to work it in strips, and then crochet them together. So this pictures shows the three ‘test’ pieces I did. The top one, grew really quick but was not right somehow, you can see the pattern but it is too loose for my liking. The second one, was smaller needles and was just right, my mum approved (always important) and I used Aran for this two pieces. The third piece was Double Knitting, and was a variegated colour – I wanted to see whether you could see the pattern using this colour wool. You can but you cannot. I have decided then, that solid colour is the way to go and Aran not DK so, next Saturday is a trip to the local wool shop to purchase the wool (I have chosen the colour – purple!) I might go with two different shades, so the stripes can alternate. 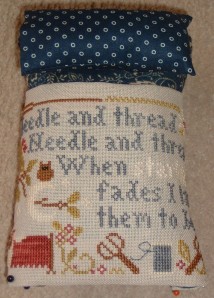 As for the reading well I have nearly finished Elizabeth Gilbert’s Eat Pray Love. An interesting read so far and one that has made me think about many different things. I have also been sent Lloyd Jones Hand Me Down World out in November 2010. I have started it and it is rather odd, but something about it has made me want to keep reading it. 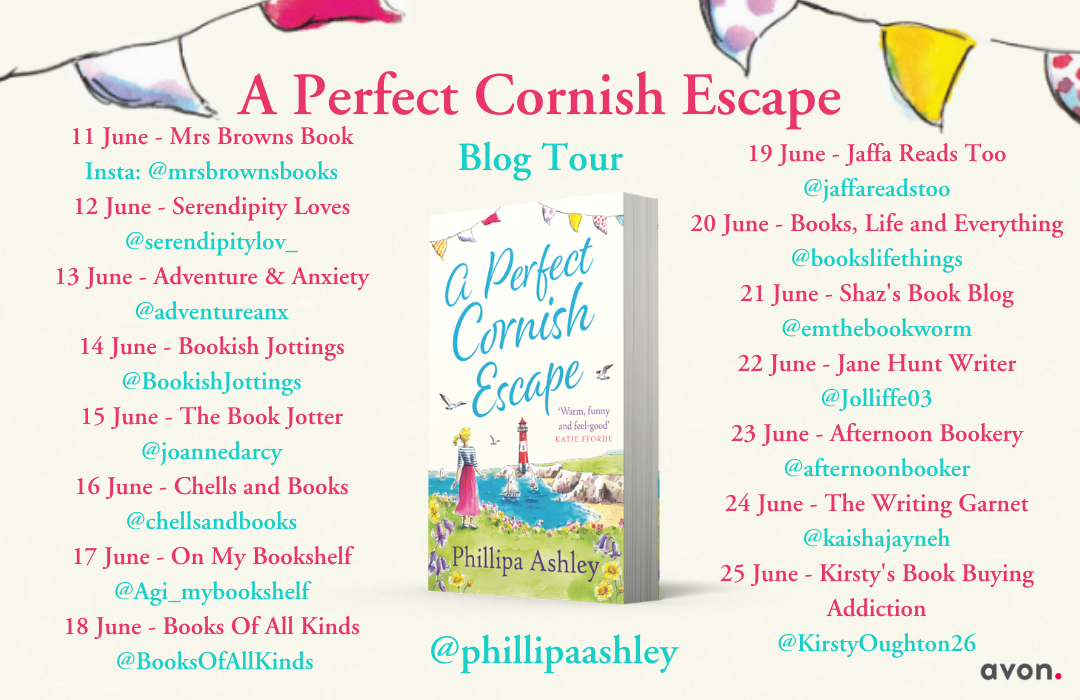